The Department of State May 2019 Visa Bulletin shows movement in employment-based categories. The EB-1 category will advance one month in all countries, moving up the cutoff date to March 1, 2018, except China and India, whose dates remain the same at Feb. 22, 2017. The EB-2 category will remain current for all countries except China, advancing to May 15, 2016, and India, advancing to April 16, 2009. Although most countries will remain current on the EB-3 category, China will advance to August 22, 2015; India will advance to July 1, 2009; and the Philippines will advance to June 1, 2018. Notably, India’s final action date in the EB-3 category continues to surpass the EB-2 category, leaving EB-3 India with a more favorable final action date than that of EB-2 India.

For those seeking to adjust status based on employment-based preference filings, The United States Citizenship and Immigration Service (USCIS) website indicates that the department’s Final Action Dates chart must be used for filing Form I-485 for May 2019. In January 2019, USCIS allowed the filing of adjustment of status applications based on the Dates for Filing chart, but has since reverted to the use of Final Action Dates. We will closely monitor the developments and advise once USCIS resumes the use of Dates for Filing chart for employment-based adjustment of status filings. 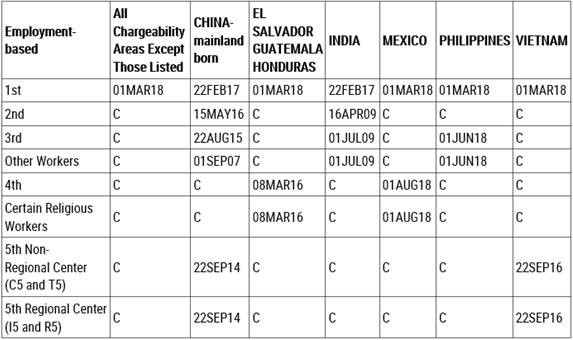 ˘ Not admitted to the practice of law.